Kendall Jenner's sisters were ''shocked'' when she got her nipple pierced earlier this year, but she loves showing if off. 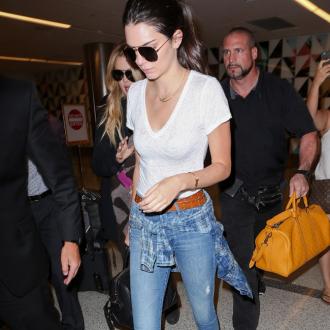 Kendall Jenner's sisters were ''shocked'' when she got her nipple pierced.

The 19-year-old model thinks people are ''obsessed'' with her intimate accessory and admits her older half-siblings, Kourtney, Kim, and Khloé, don't entirely approve of it.

In a new post on her website and app, the brunette beauty wrote: ''I think people are obsessed with the topic because it seems so unexpected of me. My sisters were honestly shocked that I did it.''

Kendall also insists her younger sister Kylie Jenner, 18, didn't inspire her to get the small bar with two metal balls on either end inserted into her left breast earlier this year.

She added: ''I wanted to get the piercing for so long before Kylie. She did hers and then everyone thought I copied her.''

The 'Keeping Up with the Kardashians' star likes showing off the jewellery and not wearing a bra all of the time.

She explained: ''I just liked showing my nipples through some of my outfits. There's something understated, yet sexy about it.''

Kendall previously admitted she decided to get the piercing when she was going through a rebellious period.

She said: ''I was going through a period in my life, having a rough time, being a rebel and was like, 'Let's just do it.'