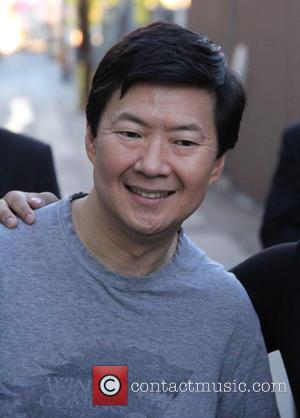 The funnyman played Korean gangster Mr. Chow in the 2009 comedy, and he admits he improvised many of his zany character's remarks as part of an "inside joke" with his Vietnamese wife, Tran.

Ken didn't even tell director Todd Phillips about his plan, but the offhand comments fitted in so well with his character, the filmmaker left them all in.

"I would ad lib. I'm Korean and I was speaking Vietnamese in the movie, like I'd say, 'Ga chet' and all these things to get my henchmen to get out (of the car)," he told U.S. breakfast show Good Morning America. "That's Vietnamese for 'chicken die'. So there's these tiny things, an inside joke just between me and Tran.

"I would sprinkle that all throughout the movie, without telling Todd or anybody and I would literally do little Vietnamese phrases to make Tran laugh. It's like the weirdest love letter to a wife in a very filthy movie!"

Tran was declared cancer-free in 2008, but Ken only went public with his wife's health battle in 2010, as he paid an emotional tribute to her at the MTV Movie Awards.

Picking up the prize for the Best WTF Moment, he credited Tran with encouraging him to pursue his acting career, and gave thanks to Phillips and co-star Bradley Cooper for helping him through the difficult personal time.

"Thank you so much - this is quite an honour," he told the crowd. "More important than this, I want to take the opportunity to thank my wife Tran, Todd and Bradley Cooper - a good friend of mine who helped me through a difficult time, when my wife Tran was going through breast cancer treatment.

"The reason I did this (took The Hangover role) was she taught me life is short and don't be afraid to take chances."

Celebrating his wife's personal victory, he cheered: "And I wanted to tell you all Tran has been cancer free for two years!"

Ken went on to reprise his role as the unhinged Mr. Chow in two sequels.