Kelly Rutherford's Kids To Spend Summer In U.s. As Custody Battle Rolls On

Actress Kelly Rutherford Will Get To Spend The Summer (15) With Her Children In Their Native U.s. While Judges In Los Angeles And Her Ex-husband's Country Of Residence, Monaco, Determine Who Has Jurisdiction Over The International Custody Battle. 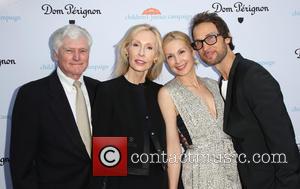 Picture: Kelly Rutherford and Family - A host of stars were snapped as they arrived for the Children's Justice Campaign which was held at Julia Sorkin's...

The former Gossip Girl star has been locked in a bitter fight with former spouse Daniel Giersch ever since a U.S. judge sent their eight-year-old son Hermes and six-year-old daughter Helena to live with their German father in Monaco in 2012.

A Los Angeles judge granted the actress temporary sole legal and physical custody of the kids last month (May15), but the order was halted by another U.S. court official amid a dispute over jurisdiction.

Giersch's lawyer alleges only a Monaco judge can issue such a ruling, and on Thursday (11Jun15), a conference call was set up between officials in both countries in a bid to get to the bottom of the case.

During the call, L.A. Superior Court Judge Mark Juhas told attorneys for Rutherford and Giersch to work out logistics to allow the kids to spend the summer in the U.S., as per a 2013 custody agreement.

Juhas set a hearing for 9 July (15), when he will reveal who has authority to make new rulings in the custody case.

A statement issued by Wendy Murphy, one of Rutherford's attorneys, to People.com reads: "Ultimately this case is about the passage of time, and whether the fact that two American children lived abroad - under force of court order - for more than two years somehow transformed a temporary parental visit with their father into mandatory forced residency in a foreign nation.

"The obvious answer is, no. Indeed, the passage of time can only facilitate the children's prompt return to this country because no court ever has authority to cause an American citizen child to be forced into exile from their own country.

"It is disturbing that judges from two nations lack appreciation for the simplicity of this constitutional reality because involuntary expatriation was rendered unconstitutional by the Supreme Court decades ago, and for good reason. There is nothing more fundamental than the right to reside in one's own country, especially this country - because the precious rights of American citizenship have no value on foreign soil."

Rutherford adds, "I hope this is finally coming to an end, and my children will soon be coming home."