Kelly Rowland has solved her dilemma of what to buy Beyonce Knowles in Celebration of the birth of her first daughter, Blue Ivy Carter, this weekend. 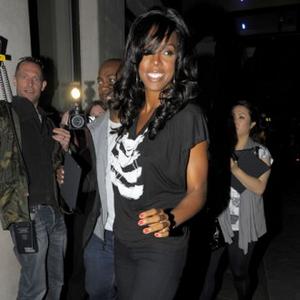 Kelly Rowland has solved her dilemma of what to buy Beyonce Knowles in Celebration of the birth of her first child.

The 'When Love Takes Over' hitmaker had been concerned about what she would give her former Destiny's Child bandmate - who welcomed daughter Blue Ivy Carter into the world on Saturday (07.01.12) - as a baby shower present.

However, she has decided upon a quirky present for the newborn, and reportedly opted for a green long-sleeved onesie adorned with the iconic image of Bob Marley while shopping in upscale New York kids' boutique Lucky Wang earlier today (10.01.12).

Kelly has previously admitted although she had prepared herself for changing "messy diapers" while babysitting the tot, she had "no idea" what she would buy for the bundle of joy because her dad, rapper Jay-Z, would ensure she had everything she could possibly want.

She told BANG Showbiz: "I'm so happy for my sister and her husband. They're so happy In This Moment right now, as they should be. They've made a little bundle of love, I'm so excited for them.