Michael Strahan announced on Tuesday that he was joining 'Good Morning America', which apparently "blindsided" co-host Kelly Ripa so much she took the day off from 'Live! with Kelly and Michael'.

Talk show host Kelly Ripa was so “blindsided” by her co-presenter Michael Strahan’s departure from their morning show ‘Live! with Kelly and Michael’ that she had to take a day off from her duties.

44 year old Strahan, an ex-NFL legend, had announced on Tuesday (April 19th) that he would be bringing an end to his four-year stint on the syndicated talk show in order to join ABC’s ‘Good Morning America’ as a full-time co-anchor in September this year. 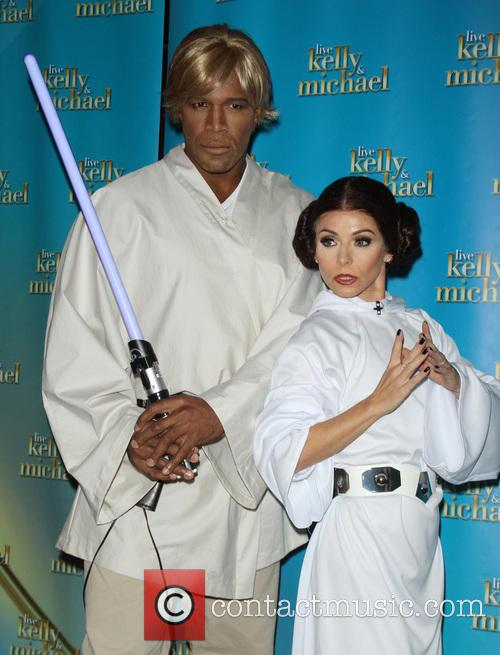 However, the news apparently came as such a shock to Kelly that she didn’t appear on Wednesday morning’s edition of the magazine programme. A source told People magazine that the 45 year old New Jersey native was “completely blindsided” by Strahan’s announcement and decided to take the day off, with former ‘SNL’ alum Ana Gasteyer stepping in as temporary replacement.

“It all happened very quickly,” the source said by way of explanation, although another is reportedly saying that Ripa is “furious” at the way Strahan has handled his exit from the show.

“She's a no-show today. No quote from her anywhere wishing him well,” the second source explains. “She was pissed two years ago when he was asked to do just two days a week on ‘Good Morning America’.”

A spokesperson for ‘Live!...’ itself has merely confirmed that Ripa “had the day off today”, after Gasteyer came out on stage with Strahan to a huge ovation on Wednesday morning. The departing co-host addressed the situation diplomatically.

“Good morning, everybody. Kelly is off today,” Strahan announced before noting that he's “been in the news lately… …I'm going to go over to ‘GMA’ full-time. Which is going to happen in September. And it's the same channel!”

Having addressed some of the reactions to his imminent departure – with some reports being “like I died” – he also acknowledged Ripa personally. “I really want to thank, of course, Kelly Ripa… …[she] welcomed me here and I've learned so much from her. She's just been an amazing influence on me and this has truly changed my life to be here with her.”