Kelly Osbourne Is In Love

Kelly Osbourne has posted a picture to her twitter page showing herself kissing boyfriend Matthew Mosshart and proclaimed she is ''in love''. 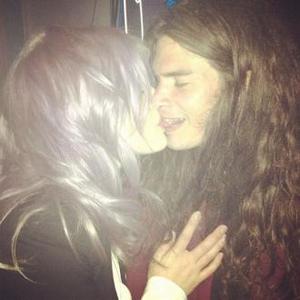 Kelly Osbourne is ''in love''.

The 'Fashion Police' host - who has been largely single since splitting with fiance LUKE WORRALL two years ago following claims he had cheated on her - posted an intimate photograph of herself kissing new boyfriend Matthew Mosshart onto her twitter page and proclaimed she is proud of the relationship.

She tweeted alongside the picture: ''I'm in love and I don't care who knows about it!''

The couple were first romantically linked earlier this year, and it was claimed they met last summer at the wedding of Kate Moss to The Kills rocker Jamie Hince, who is the bandmate of Matthew's sister Alison Mosshart.

A source said at the time: ''Kelly is dating Matthew Mosshart.

''They met at Kate Moss' wedding and are very much in love. Kelly has learned from her previous relationships and wanted to keep this one quiet for as long as possible. She's never been happier!''

The pair made their first public appearance as a couple at a Los Angeles party last night (20.06.12) and Matthew is believed to have met Kelly's parents Sharon and Ozzy Osbourne.

The source said: ''Matthew is the first guy Kelly has ever brought home that every single one of her friends and family like. And he's also the first boyfriend with whom she's had a close relationship with his family.''