Kelly Osbourne has spoken about her new relationship with musician Rob Damiani, saying she wants to ''take things slowly'' - but will keep the details of her romance private. 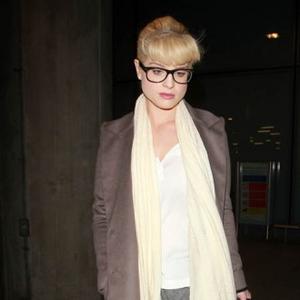 Kelly Osbourne has admitted she has a new boyfriend.

The 26-year-old star - who split from model fiance LUKE WORRALL last July amid rumours he had cheated on her - is enjoying spending time with British musician Rob Damiani, 26, but wants to take their romance slowly.

Following speculation she had been dating Rob, Kelly wrote in her column for Closer magazine: "It's true, I'm having fun getting to know someone new. I met Rob over in the UK recently, and I want to take things slowly, so that means keeping some things private."

Though Kelly is enjoying her new romance, she is planning to keep conversation about him to a minimum following her recent rant at Luke on twitter, in which she branded him a "piece of s**t" and a "user".

She added: "Loads of people saw my twitter rant about my ex-boyfriend over

Christmas, and this is the last time you'll probably hear me talk about my relationship in the press - I've learned my lesson the hard way! I'm excited about this year - onwards and upwards!"

In her tirade against Luke last month, Kelly branded him the "worst thing" to happen to her.

She seethed: "Luke is the worst thing that ever happened to me I don't give a f*** what happens to him anymore. He used me for my money and a free ride. He is lucky I am not spilling the whole truth about what he did.

"Luke's the biggest piece of s**t. He has been trying to get back with me.

"I only came home for Christmas to see him. Meanwhile he has been f***ing 100s of girls behind my back. All he did was use me. All girls beware of Luke Worrall he is a using ****. (sic)"

However, Kelly is now said to be "inseparable" from Rob - who is in a band called Don Broco - since they met in a club in the UK over the festive season.

A source said: "She was standing against a wall not having fun and not really talking to anyone and out of no where a boy came up to her and started chatting her up. They were pretty inseparable from that point on.

"It's like the old Kelly is back. She's happy and glowing!"