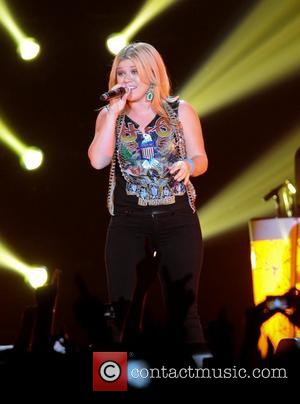 Those Kelly Clarkson gay rumours have finally been put to bed by none other than Kelly herself. She’s obviously grown tired of people assuming that she’s gay just because she hadn’t been in a relationship for a while, and told Cosmo that she’s “always batted for the boys’ team.” Having said that, it obviously hasn’t put the girls off trying it on with her as she proudly brags that she gets “hit on by the hottest girls ever. Oh, my god, if I were a lesbian, I would be so in luck. But it's just not my thing.”

Of course, anyone that’s been paying any attention whatsoever to Kelly’s life, is probably sat there right now thinking ‘hang on… I thought that Kelly Clarkson was engaged… to a man..?’ Well, yes, she is, but for the purposes of this attention-grabbing news story, it was very important to let you know that she is not a lesbian! Those rumours are still out there, guys and it was important to put them to rest.

Clarkson is, in fact, engaged to Brandon Blackstock and says that he’s “totally the one.” Which is handy, when you are planning to marry someone. Their relationship has managed to survive, despite the fact that their first date was the day Whitney Houston died. A bad omen, apparently.