Kelly Brook has laughed off rumours she got married to David McIntosh on Friday (30.05.14). 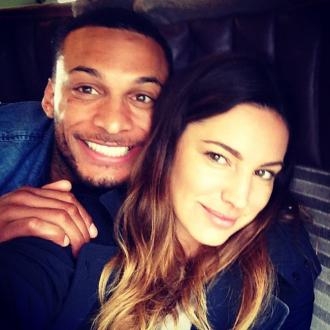 The glamour model sparked speculation she tied the knot with David McIntosh after posting a picture on her Instagram account of them on the Eurostar and referred to him as her ''husband.''

But it appears the couple were merely en route to a friend's nuptials at the Chateau de Halloy in Ciney, Belgium.

The 34-year-old beauty shared another picture of herself in a short white dress and David in a suit at the ceremony, with the caption: ''Wedding Day!! Not Ours HA! Lol (sic)''

She later posted a photo of David with the groom David Griffiths, who wed Lauren Toub.

Kelly and David - a former royal marine - have had an on/off relationship since they met on New Year's Eve (31.01.14) and it was previously claimed they ''rushed into the engagement''.

A source said at the time: ''David proposed without a ring and friends think Kelly probably shelled out for her own.

''He's hardly the most romantic man in the world and she's got far more cash than him.

''They rushed into the engagement and then realised they needed a ring to prove it's for real when they got photographed together. Her friends are privately saying they don't think the romance will last.''