Model And Actress Kelly Brook Has Confirmed She Bared All For The Pilot Episode Of Her Hit New U.s. Comedy Series One Big Happy. 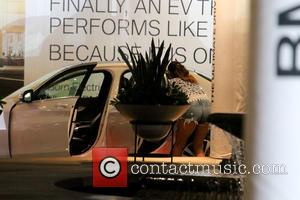 The busty Brit's famous boobs were pixellated leaving viewers unsure if she actually stripped off for the scene, but she admits she was naked in front of co-star Elisha Cuthbert.

Brook says, "We shot that the day before the studio audience came in... You just have to block it out.

"That was always in the script, so I always knew that that scene was gonna come up, but luckily by then I'd got to know Elisha.

"We had a closed set - there was, like, a cameraman and the director."

Brook reveals she improvised the scene during her audition and thrust Cuthbert's face in her cleavage.

She explains, "To get the job, you wanna make an impression... Elisha's a little bit smaller than me and she kinda came up to me boob height... and I think with a sitcom you have to be a little bit larger (than) life and so I did kinda grab her in the audition... and the producers loved it."

But when it came time to rehearse the scene, Brook found herself face-to-face with show producer Ellen Degeneres: "I hadn't met Ellen... and she actually walked through the door instead of Elisha and frightened me... I literally just screamed... She's a practical joker. She terrifies me. I think she's gonna jump out from anywhere."