Kelly Brook appears to be getting serious about her new boyfriend David McIntosh after she was spotted introducing him to pals including Ellie Goulding last night (16.01.14). 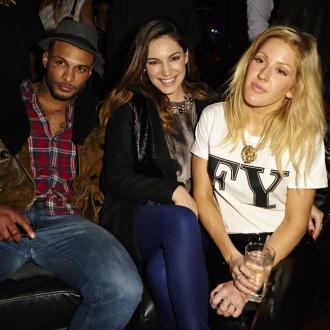 The 34-year-old star has been inseparable from her new beau David McIntosh - who appeared as Tornado on the 2008 revival of UK TV game show 'Gladiators' - in recent weeks and it appears she has taken the next step in her relationship by introducing the burly hunk to her friends.

Kelly and David, 27, were spotted laughing and joking with 'Burn' hitmaker Ellie, 27, as they enjoyed a night of bowling at the launch of new entertainment complex Brooklyn Bowl at London's The O2 arena last night (16.01.14).

The glamorous brunette was smitten with the former Royal Marines commando at the star-studded event, as well as an earlier NBA basketball game between the Brooklyn Nets and Atlanta Hawks which took place at The O2.

Kelly, who was first spotted with David on New Year's Eve in December, has had a glowing start to 2014 following a turbulent year in 2013, when she ended her relationship with rugby player Danny Cipriani amid allegations he cheated on her.

It was recently claimed the couple's blossoming romance has even led to David moving into Kelly's west London home.

A pal close to the army veteran said: ''I've spoken to David and understandably he is over the moon. He hasn't left the place and he's growing very close to Kelly.''

Other stars who celebrated the launch of The O2's Brooklyn Bowl - which opens to the public this weekend - included model Cara Delevingne and The Wanted's Siva Kaneswaran.