Glamour model Kelly Brook has revealed she once punched Danny Cipriani - who she split from last year following cheating allegations - after he gave a stripper his number. 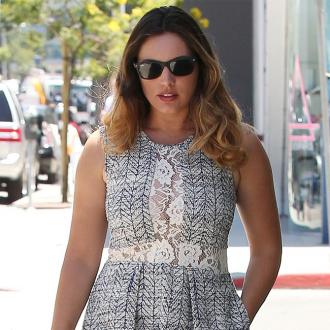 Kelly Brook punched Danny Cipriani when he gave a stripper his phone number.

The glamour model - who split from her former lover in August last year after he allegedly cheated on her - has written about her relationship in her autobiography 'Up Close', and revealed her reaction to the incident which occurred during a trip to Las Vegas.

In extracts published by The Sun on Sunday newspaper, she told of how her ex-boyfriend had talked to a stripper at Spearmint Rhino before excusing himself to the bathroom.

She wrote: ''My dance finished, so I decided to go to the loo as well. On the way, I decided to try to find him as he had been gone rather a long time ... I found nothing, so gave up and went to the loo.

''While I was in the cubicle, on the other side of the door the missing lap dancer was chatting to her friend, saying how hot Danny was - and how he'd given her his phone number.''

Kelly explained she then confronted Danny, and was asked to leave the club.

She continued: ''As I headed back to the table, I saw Danny walking towards me. 'Babe,' he said. 'I've been looking for you!' I punched him straight in the face!

''At that point, four bouncers leaped on me. They picked me up like the crazy, drunk, betrayed woman I was. it had all gone very Jerry Springer.

''I was then carried out of the club in my new cherry-print mini-dress as they held Danny back inside the club.''