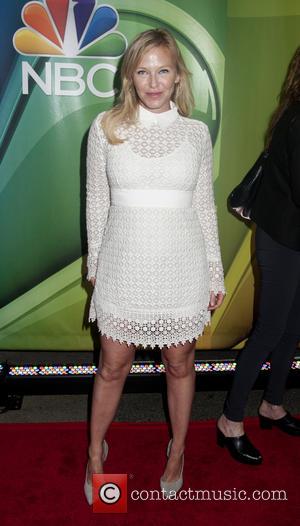 Picture: Kelli Giddish - A host of stars were snapped as they arrived to Radio City Music Hall for the NBC 2015 Upfront event in New...

Giddish and her beau Lawrence Faulborn tied the knot during an intimate ceremony at a beach house in New Smyrna Beach, Florida on 20 June (15), according to website Paradise Beach Weddings.

In photos from their big day, Giddish is shown wearing a flowing white dress and topped off the look with crown made of yellow-tinted flowers.

News of their nuptials emerge on the same day as Giddish's Law and Order: SVU co-star Ice-T revealed his wife Coco Austin is expecting, and the longrunning drama's executive producer Warren Leight confirmed Giddish's baby news on Twitter.com by poking fun of the baby boom on set.

The showrunner wrote on Monday (27Jul15), "@FINALLEVEL (Ice-T) and @cocosworld having a baby. @TheKelliGiddish and L Faulborn having a baby. #SVU -- most fertile show on Earth. Congrats all!!"