Actress Kelli Garner Almost Turned Down The Chance To Play Marilyn Monroe In A New Tv Miniseries, Because She Feared She Would Not Be Able To Do The Movie Icon Justice Onscreen. 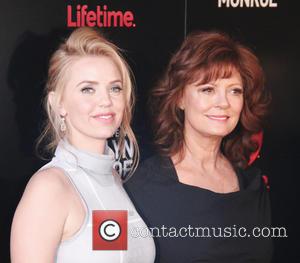 Picture: Kelli Garner and Susan Sarandon - Screening of 'The Secret Life of Marilyn Monroe' - Arrivals at The Theatre at The Ace Hotel - Los...

The Aviator star plays the late legend in The Secret Life of Marilyn Monroe, which is based on J. Randy Taraborrelli's book of the same name, and she admits she had reservations about taking on the complex role.

She tells U.S. breakfast show Today, "I was extremely apprehensive; it's Marilyn Monroe. Those are really, really big shoes and I wasn't sure if I could pull it off."

Garner explains she eventually agreed to take on the part because the TV series examines Monroe's struggles with mental illness, a subject matter the actress was fascinated by because of her own experiences in therapy.

She continues, "I knew it would, if anything, make me a better actress. It was a challenge and a study of myself as a performer.

"One of the most favourite things is this (scene) that we used to tell a story and it starts with her sitting down with this fictional therapist and I found that fascinating. I think it's important to talk about mental health and I've been in therapy myself and be able to play such an icon in such intimate sounding board moments of trying to figure out what's going on was really fascinating to me."

Watch the trailer for G-ForceGuinea pigs have never been so interesting or dangerous, Darwin, Juarez,...