Kellan Lutz admits he wouldn't mess with Victor Ortiz because he could do some serious damage. 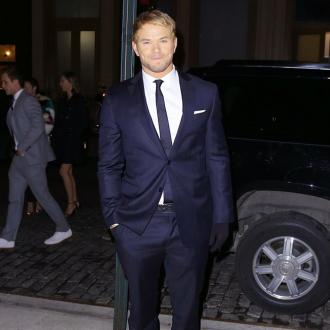 The 29-year-old actor stars alongside the hunk - who a professional boxer and a former WBC Welterweight Champion - in forthcoming 'The Expendables 3' and he insists he's like a ''little pit bull'' but would be able to so some serious damage.

Talking to collider.com, he explained: ''Victor Ortiz, he's like a little pit bull. We would go out drinking, he's the nicest man but that guy is quick. I watch him, I go to some of his training stuff and it's even funny. Victor's just a little puppy dog, it's his first movie, watching him running to Statham's trailer, open the door like, 'Yo! Jason, what are you doing?' And Jason's like, 'You better f***ing get out of here.' But then at the end of the day, he was never mad, he's screw around with Victor. He's like, 'You're the only guy who can bust in there that I wouldn't do something to because I know you'd kick my ass.' And to hear Jason say that -- I don't know who would win that.''

They will be joined by Sylvester Stallone, Jason Statham and Antonio Bandera in the sequel to 2012's 'The Expendables 2'.