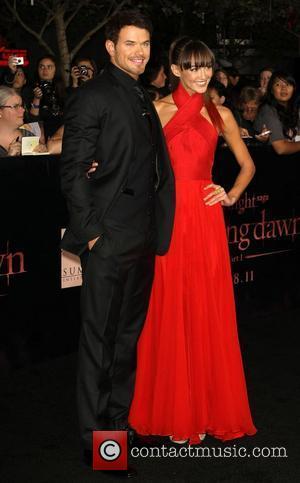 Twilight star Kellan Lutz paid his respects to the war veterans who lost their lives in the 1941 Japanese attack on Pearl Harbor during a trip to Hawaii last week (ends29Jan12).
The movie hunk travelled to Honolulu for Sunday's (29Jan12) National Football League's Pro Bowl game, but he also decided to take in a little U.S. history and stopped by the Hawaiian naval base which was bombed by the Japanese during World War II.
And Lutz admits he was incredibly moved by the visit.
In a series of Twitter.com posts on Thursday (02Feb12), he writes, "Was deeply affected visiting Pearl Harbor for the first time. I have such admiration for the troops that gave their lives that day and for everyone in the military who was, is, and will be. Thank you!
"Huge thx (thanks) to the guys and gals @nfl for inviting me to the Pro Bowl at Aloha stadium in Hawaii..."