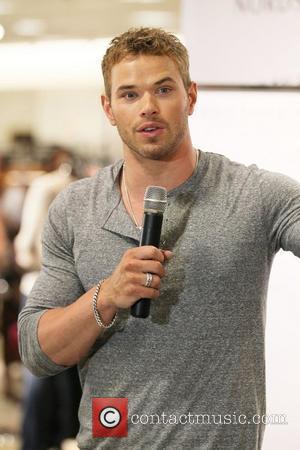 Picture: Kellan Lutz makes an appearance at Norstroms at The Grove to promote a clothing line Los Angeles, California - 11.08.11

Twilight star Kellan Lutz has been left scarred for life after coming too close to a blade during a fight scene in new movie Arena.
The actor plays a Roman gladiator in the fight epic and admits his gung-ho spirit left him with a painful souvenir.
He explains, "We had this machete fight. I leaned in a little too closely for this machete and it goes 'Slash!'"
But Lutz is proud of the battle scar on his chest.
He says, "I like it because I love scars for some reason. I feel like you get them and they aren't on purpose, but you have them forever and you get to remember where they came from."