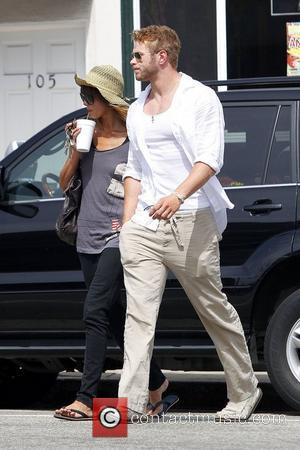 Picture: Kellan Lutz stops at Starbucks for an iced coffee before heading to pick up take out Mexican food with a friend Los Angeles, California -...

Twilight star Kellan Lutz has a new woman in his life - he is reportedly dating actress Sharni Vinson.
The movie hunk was photographed with a new brunette beauty in Venice, California on Thursday (01Sep11), when they made a trip to a coffee shop before heading for a stroll by the beach.
The woman has been identified as 28-year-old Vinson, who appeared in dance movie Step-Up 3D.
The pair reportedly met through mutual friends and have been a couple for two months, according to UsMagazine.com.
A source tells the website, "She's a lot of fun. They are both very into working out. They hang out in Venice a lot and just stay low-key."
Lutz, 26, split from on/off girlfriend AnnaLynne MCCord earlier this year (11) and was briefly linked to Maxim model Melanie Iglesias in June (11).