Kelis Urges Collaborator To Feature Her In His Video 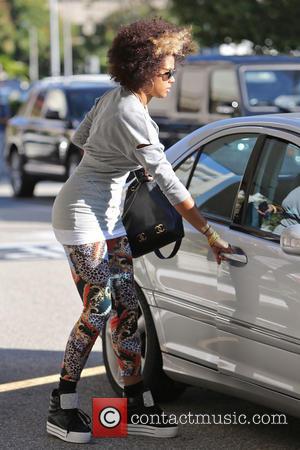 Picture: Kelis getting into her car after shopping at Saks on Fifth Avenue with her son Knight Featuring: Kelis, Kelis Rogers Where: Beverly Hills, California, United...

Kelis has issued a public appeal to her Dj collaborator Skream after he decided not to feature her in the video for their joint single.

The Milkshake hitmaker teamed up with the British producer for a track called Copy Cat, which hit the Internet late last year (12), and she wanted to shoot an accompanying promo with famed photographer Rankin.

However, Kelis has now revealed she hasn't been included in Skream's plans for the video.

In a series of posts on Twitter.com, she writes, "Skream somehow thinks I don't need to be in it (the video)... Does that make any sense at all?... In what alternate universe would Skream be more fun to watch in (the) video than I would be singing my song!... We all know Rankin is brilliant and a dear friend of mine. I wanted him to shoot the video, naturally. Skream... also doesn't think that's a good idea!... That leaves me speechless... Skream makes me wanna (sic) scream! (And) not in a good way!..."

The singer goes on to reveal she hasn't been able to contact the Dj or his team, so she has issued an appeal via Twitter urging him to let her be involved in the shoot.

She adds, "Tell Skream to shake 'it' off and stop being ridiculous!... I've been trying to get a video done but couldn't get a response from Skream or his team for ages! Come on guys, be real. And finally... I was told... it would be done without me.'Huh?' that was my response. Then I tweeted it cause I decided that sucks (and) makes no sense. So, finally. Hello Skream, care to do a video? Awwww, I understand your (sic) a very busy man but please pretty please, lets make a video."