R&b Star Kelis Is Preparing To Share Her Favourite Recipes With Fans In Her First Cookbook. 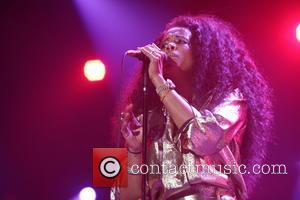 The Milkshake hitmaker has taken a step back from the music industry in recent years to hone her culinary skills and the certified chef put her talents to the test last year (14) by serving up homemade dishes out of a food truck during the South by Southwest festival in Austin, Texas.

Kelis, who previously launched her own line of sauces, has since put pen to paper to document her top culinary creations from around the world, and she unveiled the cover art for My Life on a Plate: Delicious Everyday Recipes & Sauces on Twitter.com on Tuesday (14Jul15).

The book, billed as "a reflection of (her) life through food", will hit retailers in September (15).

Celebrating the news on Twitter.com, Kelis writes, "A VERY exciting day for me! You can NOW pre-order my first cookbook #MyLifeOnAPlate".