The guitar icon will star in Julien Temple's documentary 'Keith Richards - The Origin of the Species' on BBC Two in July, and will also curate a weekend of programming for BBC Four.

The Rolling Stones’ guitarist Keith Richards is to star in a documentary movie about his childhood years growing up in post-war Britain, as well as curate a weekend of films, documentary clips and live performances for BBC Four.

The 72 year old guitar hero will front the 60-minute documentary film Keith Richards – The Origin of the Species, directed by Julien Temple, which will form the centrepiece of the BBC’s My Generation season, about the history of pop music, next month.

Richards will also “hand-pick” two nights of films and live performances that will constitute what it calls a “lost weekend” of programming in July. 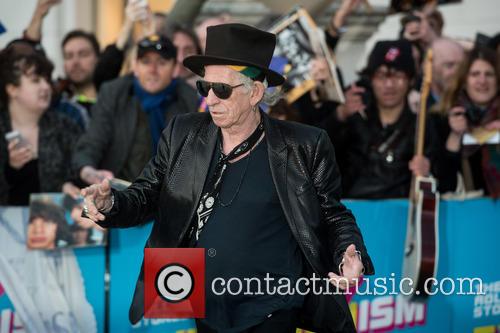 Speaking about his involvement in the documentary and about his early years, Richards recalled that “there was a feeling that there was a change coming. [Prime Minister] Harold Macmillan actually said it - the 'winds of change' and all that - but he didn't mean it in quite the same way.”

“I certainly felt that for my generation, the feeling in the air was - it's time to push limits. The world is ours now and you can rise or fall on it.”

More: Keith Richards criticises the likes of Adele and Rihanna for over-reliance on other people

Acclaimed director Temple, who shot a concert movie with the band way back in 1991 called Stones at the Max, told the BBC: “Listening to the early Stones as a kid changed everything for me. I felt a new way of living emerging, a new kind of person becoming possible – something I wanted to be a part of… and without a doubt I thought Keith Richards was the origin of the species. This film sets out to explore how both he and the ‘60s in England came about.”

Richards is still touring with the Rolling Stones, who celebrated their 50th anniversary in 2013 and show no signs of slowing down, planning to release their first new album in 11 years later in November.

BBC Four’s editor Cassian Harrison said: “Keith Richards is undoubtedly one of the key icons of our age. His film for BBC2 will be a fascinating exploration into the post-war years, how they impacted both his life and others and influenced the ‘60s and the decades that followed.”