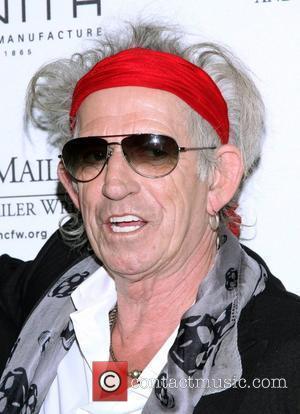 Former U.S. President Bill Clinton was on hand to present Keith Richards with an award for his best-selling memoir Life on Tuesday (08Nov11).
The Rolling Stones legend accepted the Prize for Distinguished Biography from his pal Clinton at the Mailer awards in New York, reports the Associated Press.
Richards joked about being an "intrusion" at the literary event, telling the crowd, "This is one for the books, if you get my drift - you hacks."
Clinton also told guests about introducing Richards to his late mother-in-law, Dorothy Rodham, who was a huge fan.
He recalled, "Do you have any idea what it's like to have a 92-year-old groupie living in your home, a woman who lived and breathed for the Rolling Stones?
"It was beautiful. He gives her an autographed copy of the book; she had already bought one on her own; she had already read it. I said, 'Dorothy, what did you think?' And she said, 'I always did like those bad boys.'"
Rodham died earlier this month (Nov11) at the age of 92.