Keith Richards Has Apologised To Mick Jagger For Life Jibes 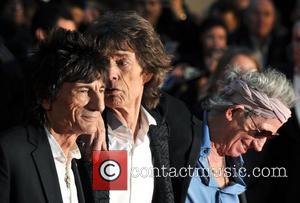 Keith Richards had to apologise to Mick Jagger for revealing too much about his bandmate's private life in his acclaimed memoirs before the ROLLING STONES stalwarts could begin rehearsals for their upcoming 50th anniversary shows.

The guitar great poked fun at Jagger throughout his book, Life - even mocking the size of Jagger's penis in one headline-grabbing segment about the singer's romance with Anita Pallenberg, who was Richards' ex.

The revelations drove a wedge between the two old pals and Richards agreed to say sorry for what he wrote as rehearsals for the band's upcoming four shows in London and New Jersey got underway in France.

He tells Rolling Stone magazine, "It was something to get out of the bloody way so we could get the band on the road... I said, 'Look forward, brother, look forward'.

"If you was married to somebody for 50 years, you can have your little spats here and there, and we don't mind having them in public occasionally."

And Jagger acknowledges his bandmate's apology, adding, "He did apologise, to my face, so you have to put all that sort of stuff away. (It's) water under the bridge, really."