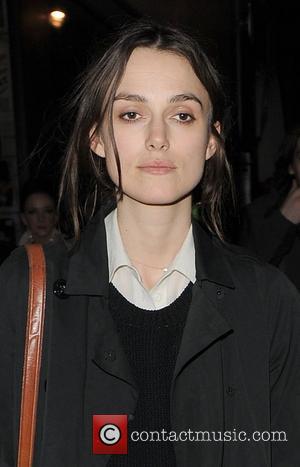 Sound the engagement klaxon! Keira Knightley's going to marry boyfriend James Righton - of lazy British indie group Klaxons. It took the Mercury Prize-winning group virtually four years to follow up their debut with the somewhat disappointing 'Surfing The Void,' hardly the strongest work ethic - now with Righton marrying someone who's a multi-millionaire we're surely doomed for a good decade before album number three as he spends his days listlessly playing a Casio keyboard whilst reclining on his fiancee's lush sofas as she's out earning the coin. Maybe.
Anyway, the UK's Sun newspaper reports that the news was confirmed by the movie star's PR who said "I can confirm that Keira is engaged to be married to James Righton," which is about as solid a confirmation as you could hope. Satisfied with her contribution to this story, the PR offered no more details, though given Righton's efficiency we're not expecting a wedding date anytime soon (ok, ok we'll stop.)
Knightley was previously in a five year relationship with actor Rupert Friend, after meeting him on the set of 'Pride And Prejudice' in 2005. She was introduced to Righton by the pair's mutual friend Alexa Chung last year, the pair moving in together to a London pad in February of this year.