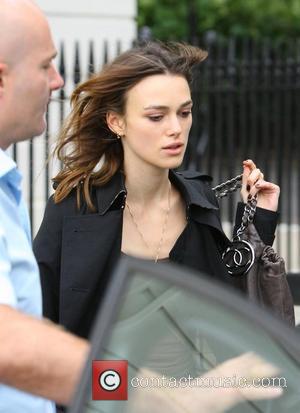 Picture: Keira Knightley rushes from her home into a chauffer driven car which quickly drives her away. Keira's new film 'Atonement' will be out in September...

British actress Keira Knightley enjoys stripping off for love scenes because she finds them "liberating". The Pirates Of The Caribbean star was required to unrobe for her part in 2005 movie Domino, but she shot her first nude scenes in horror film The Hole - when she was just 16. She says, "Sex scenes are easy. I don't really have a problem with them. "Actually it was quite liberating in the movie Domino to be out in the middle of the desert completely topless with a beautiful Venezuelan guy (co-star Edgar Ramirez). I was very lucky." But while the 22-year-old has no qualms about going topless, she insists on having an extra stand in to bare their bottom. She adds, "I did have a body double for my bum but not on my top. I don't have a problem with that."