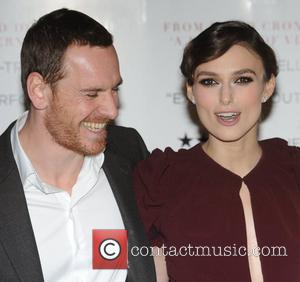 British actress Keira Knightley was so determined to nail her role in racy drama A Dangerous Method she practised her sex faces in a mirror for two days before showing them to the film's director over Skype.
The Pirates of the Caribbean star plays young Russian mental patient Sabina Spielrein in the movie, opposite Michael Fassbender, who stars as famed psychiatrist Carl Jung.
Knightley's character is seen being violently spanked, and the actress was so concerned about the scenes, she tried out her sex faces on director David Cronenberg first using the internet videophone service.
She tells Britain's The Sun, "It was a huge part of what Sabina was doing a lot of the time. So I asked psychoanalysts about it and they said, 'Sex and anything like that is trying to release energy, trying to release pent-up emotion'.
"So I worked with that and sat in my bathroom and pulled faces at myself for about two days, trying to figure out what it was going to be.
"Then I got on Skype with David and went, 'I've come up with this', or, 'I've come up with this', and he went, 'That one!'"