Keira Knightley ''nearly killed'' her husband when he tried to teach her to play guitar for new movie 'Begin Again' and found the experience frustrating. 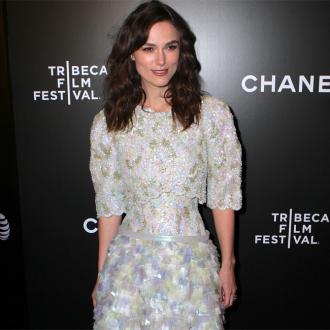 Keira Knightley ''nearly killed'' her husband when he tried to teach her to play guitar.

The stunning actress, who had to learn to play the instrument for her role of Greta in the film 'Begin Again', admits it was a bad idea to let her husband, James Righton from indie band The Klaxons, teach her the basics.

Asked if it was fun being taught by James, she said: ''No, I nearly killed him. Don't get your spouse to try to teach you a musical instrument. It's just a terrible idea. I wonder if there's ever been a death by guitar? Do you think anybody's ever done that? I did actually learn to play, but I can't sing and play at the same time.''

The 29-year-old actress claims she doesn't know ''anything about music at all'' and has to concentrate on songs to be interested in them.

She said: ''I never really listen to it [music]. If it's on in a room, I can't really hear it. I don't have that sort of brain. And that's another reason I was so interested in doing this film. I'm married to a musician, my best friends are completely obsessed with music, my brother was in bands - it completely surrounds me, but I really have to concentrate to pick it up. If I'm really drunk, then I'll dance, but I won't know what I'm listening to.''

The 'Anna Karenina' star appears alongside Maroon 5 singer Adam Levine in the new movie, and Keira claims he was worried about his performance because he is relatively new to acting.

She told HELLO! magazine: ''Adam kept saying that he was nervous, but I can't imagine Adam nervous. He has the most incredible confidence. He's a proper entertainer.''