Keira Knightley has confessed she was hoping her singing voice would be as good as Adele's in her new film 'Begin Again'. 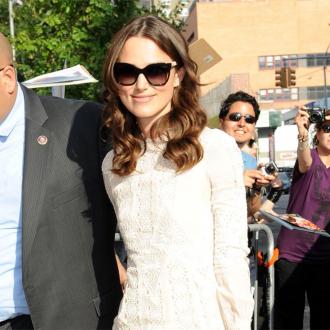 The 29-year-old actress stars as aspiring singer Greta in the upcoming comedy-drama and although she admits she was surprised by how good her voice sounded, she was hoping it would be comparable to that of the 'Rolling in the Deep' hitmaker.

Quizzed on whether she was aware of her talent before making the film, she said: ''I had actually done it on one other movie but in a very different style, but no, I've never sung like this. I was actually quite disappointed that I didn't sound like Adele.

''You know when you're in the shower and you're just singing and you think, 'Wow, I sound really good right now. I sound so good I could totally do that Adele thing'. And then you get into a recording studio, as I did, and you think, 'Oh, no, I can't do the Adele thing'.''

The 'Anna Karenina' star also revealed that during her audition for the film - which tells the story of how a chance encounter between a disgraced music executive (Mark Ruffalo) and a young singer-songwriter (Knightley) turns into a promising collaboration - she wasn't actually asked to sing.

Speaking on 'The Daily Show with Jon Stewart' she said: ''I wasn't given the songs until two days before I had got into the studio and I'm not a singer and I don't know how to do this, so we kind of just got in there and just sort of went, 'Ok we have four days, this has to work'.''