Keira Knightley used to be ''neurotic'' and took herself too seriously but has grown more relaxed since turning 25. 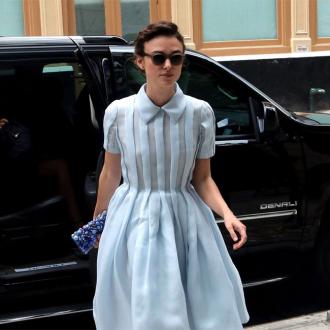 Keira Knightley was ''pretty neurotic'' until she was 25.

The 29-year-old actress used to take herself ''far too seriously'' and obsessed over the criticism she received, particularly over her looks.

''What can you do about it? I look the way I look, I am not willing to cut my face up.

''Everything up to 25 I was pretty neurotic and taking everything far too seriously.

''I found it difficult to step back from it and I was taking it very personally. Partly because as an actor you don't want necessarily that thicker skin, and I couldn't figure how to be open emotionally and yet get a thick enough skin so that things didn't hurt.''

The 'Imitation Game' actress insists she is much more relaxed now as she has accepted she can't control what other people think.

She told the Daily Mirror newspaper: ''I don't know if it was a chemical thing, a certain kind of realisation that it really didn't matter - and a sudden realisation of what you have control of and you don't.

''You suddenly have a moment where you go, actually I can't do anything about that.''

And Keira - who is married to Klaxons musician James Righton - admits staying away from reading about herself online has helped with her relaxed attitude.

She added: ''I don't Google myself - that was the problem before 25. Not that I did it all the time, but I certainly saw enough to say, 'Oh, you shouldn't look'. I mean, you don't need to look, it is not helpful.

''You have to be quite vigilant about it. Again I think this is probably the same if you are on social media and if you do put anything out in the public, you are opening yourself up now to a lot of criticism and a lot of people telling you they hate you.''