Keira Knightley admits she is ''stupidly sensitive'' but has learned to move on quickly from criticism. 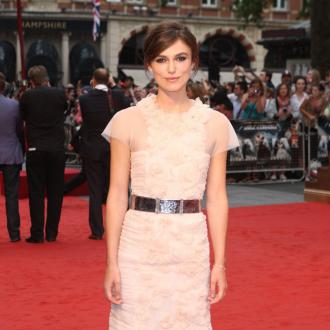 The 29-year-old actress still feels hurt when she receives criticism, but has learned to pick herself up and move on from upsetting incidents.

She said: ''I'm stupidly sensitive. It;'s ridiculous to have got 10 years on in my career and find that some things still hurt as much. I don't know if it's ego.

''I do tend to get back up quite quickly after I've been hit down and then I try to forge ahead as much as possible.''

However, the 'Begin Again' star is no longer affected by bad reviews as she knows she has always done her best.

She added in an interview with Britain's OK! magazine: ''Film is such a strange magical thing that sometimes things don't come together.

''You have to go, 'It's out of my hands.' If it doesn't work, I'm proud because that day I felt like s**t, I still managed to play this incredibly important scene and I don't feel I completely f***ed it up.

''You give months of your time to make a movie and you don't have a life outside it. So if you only think it's worth it if it's critically well received, then you'll end up spending an awful amount of time incredibly disappointed.''