Keira Knightley's husband James Righton is enjoying 'drinking for two' whilst his wife is pregnant with her first child. 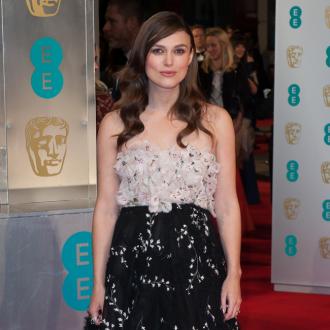 Keira Knightley's husband is enjoying double the drinks whilst she is pregnant.

The 'Imitation Game' actress has joked that her husband, The Klaxons' James Righton, is also enjoying her share of any alcohol they are offered whilst she enjoys eating for two.

Speaking about using her pregnancy as an excuse to make her husband attend awards parties with her, she said: ''I'm [telling him], 'You have to come with me, support me!

''There's a lot of free champagne [at events], so he thinks because I'm not drinking, he has two. I'm eating for two and he's drinking for two.''

Meanwhile Keira - who tied the knot with James in a ceremony in France in 2013 - has confessed she is trying to plan as much as she can about the birth but knows it isn't possible.

She told 'The Ellen Degeneres Show': ''There's a whole birthing plan [in place], but what is the plan, apart from to get it out? My plan is to get it out.''

The 'Pirates of the Carribean' star also admitted she is worried about doing tasks such as changing nappies once the little one arrives.

She added: ''Somebody said to me the other day, [that] the problem with boys is - sorry this is horrible - but when you're changing their nappies, you can get the wee in your face.

''I never knew that before so it was terrifying. Apparently they roll as well, so you have to like try to stop them while you're trying to grab something else in order to stop them peeing in your face. That sounds quite interesting.''