British Actress Keira Knightley Is Refusing To Let A Scary Brush With An Obsessed Fan Ruin Her Broadway Debut. 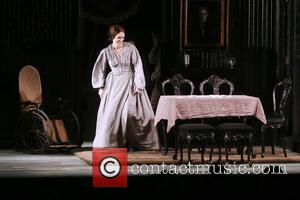 The Pirates of the Caribbean star is enjoying her first turn on stage in the fabled New York theatre district in a new production of Therese Raquin, but the first preview performance was disrupted by a man who began shouting at the actress.

The play had only been running for 15 minutes when the audience member threw flowers at her from the mezzanine, loudly begged for the 30-year-old star to marry him, and pleaded for a response.

Keira and her castmates managed to ignore the rude fan and carry on with the performance while security guards bundled the man away, and now she has opened up about the scary incident, revealing she was determined not to let the rowdy male ruin the whole show for the rest of the audience.

"Live theatre is live theatre," she tells British publication the London Evening Standard. "You never know what you're going to get... We know Broadway tickets are very expensive so the most important thing for us is to make sure that people haven't wasted their money and that we're professional at all times."

Reports suggest Keira was so shaken by the experience, she later filed court documents accusing the man of harassment in a bid to keep him away.

The interruption was the first in a series of unfortunate incidents to have befallen the star during the troubled run as just days later, Keira sustained a wrist injury which forced producers to cancel a performance.

The play also failed to win over critics following opening night on Thursday (29Oct15), receiving a slew of lacklustre reviews for the "dreary" production, while Keira was also criticised for her acting in a piece published by the Wall Street Journal.