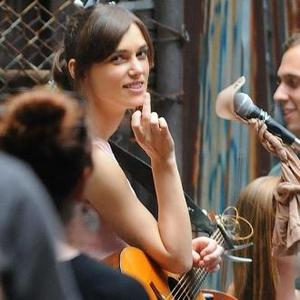 The actress revealed her admiration for the CHANEL designer who famously labelled Adele ''too fat'' earlier this year and recently revealed he doesn't like Pippa Middleton's face.

The movie centres on aristocrat Anna's life-changing affair with the wealthy Count Vronsky.

''He'd take the make-up and wig off and look f***ing brilliant. And everyone would say, 'Oh yeah! Good-looking man underneath!'''

The 27-year-old star insists she's more comfortable in her skin that she's ever been.

She revealed: ''I hated late teens, I hated early twenties, all of that, I think a lot of people do.

''Possibly I think I'm one of those people that always would have done and it didn't really matter where I was in life.

''But I was totally uncomfortable in everything. And all of a sudden 25 hit, and I was like, 'Ah, I think I'm all right.'

''And actually, after 25 it's been pretty good. I definitely feel like I've been around the block a couple of times, and that's great.''