Keira Knightley married James Righton in a low-key ceremony at the town hall in Mazan, 12 miles from Marseilles in France today (04.05.13) 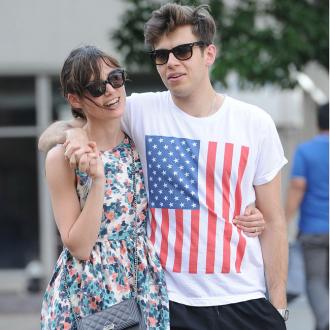 The couple - who got engaged in May 2012 after meeting through mutual pal Alexa Chung - exchanged vows shortly before midday in a low-key ceremony at the town hall in Mazan, 67 miles from Marseilles, before speeding back to her family's nearby $5 million vineyard for their reception in a silver Renault Clio.

A source told the MailOnline website: ''It was a very moving ceremony. Keira looked extremely moved by the whole thing - there were certainly tears of happiness.

''It was sunny day without a cloud in the sky. There were cheers of 'Well done, Keira' when she came out, but there were so few people present so they didn't make much noise.

''It was amusing to see them being driven away in a battered old Renault Clio - it certainly looked as though it had seen better days.''

The 28-year-old 'Anna Karenina' star wore a custom-made short strapless dress, believed to have been created by Karl Lagerfeld, pale pink ballet flats, a cropped Chanel jacket and a delicate floral garland around her head.

Among the small number of guests at the ceremony included the actress's playwright mother Sharman MacDonald, father Will Knightley and Keira's brother Caleb, as well as James' father Nicholas and his brother Bill.

The Klaxons keyboardist is tipped to join his bandmates to entertain guests at their marquee reception, which is expected to be attended by 50 close friends and family.

Several tents have been erected on the sprawling 20-acre estate, which was purchased by the British star in 2010, and guests will indulge on 120 bottles of wine sourced from local vineyard Chateau Minuty.