Keira Knightley confessed being on the set of her new thriller 'The Imitation Game' brought back horrible memories of struggling in her maths classes. 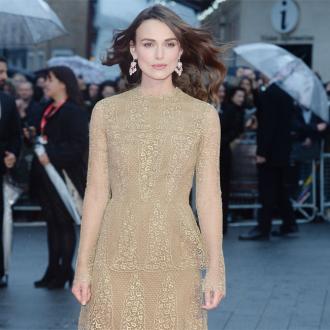 Keira Knightley felt like she was at school while filming 'The Imitation Game'.

The 29-year-old actress admitted she and her co-star Benedict Cumberbatch - who plays the enigma code-breaking genius Alan Turing in the WW2 thriller - struggled to understand any of the maths that they were taught on set.

In spite of attempts by an engineer to explain the concepts of coding to the brunette beauty, Keira struggled to pay attention to the complex theories and admitted the whole process brought back terrible memories of her school days.

She said at a press conference for the movie at the Corinthia Hotel in London yesterday (08.10.14): '' We were really bad at all of it. And I didn't understand any of the maths.

''It's that feeling that I haven't had since school being in maths, you just sort of feel like you've died. He was such a nice man, I should have been paying attention but I didn't.''

The 'Atonement' actress - who celebrated the film's debut alongside Benedict, 38 and their co-star, 'Downton Abbey' actor, Allen Leech, at the Odeon cinema in London's Leicester Square during the BFI film festival last night - also admitted she didn't have much luck solving word puzzles on set, insisting it took the cast five days to complete a simple crossword.

She said: ''One day we thought, Oh yeah, we should really be doing crosswords,' so we brought the quick crossword, there were five of us and it took us five days.''