Keira Knightley: I Have Bad Skin

Keira Knightley feels self-conscious about her 'bad skin' and admits she is incredibly shy when it comes to her body. 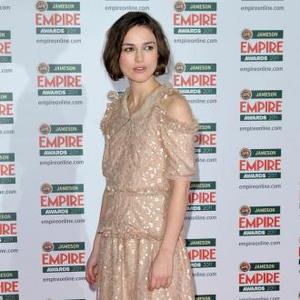 The 26-year-old face of CHANEL admits she has a whole host of hang-ups when it comes to her much-photographed face.

She said: ''I've never seen myself as being attractive in that glamorous way.

''If you're using your face, if you're selling it, then you've become so aware of the flaws because people tell you. And they do so brusquely. So then you start seeing it.''

Keira portrays the highly sexual patient-turned-analyst Sabina Spielrein in new movie 'A Dangerous Method', although she insists she is actually incredibly shy when it comes to stripping off.

In an interview with Australia's Vogue magazine, she explained: ''Firstly, it's the superficial thing of seeing your flaws on the screen. That's probably going to be all that you see and you focus on the bits you don't particularly like.

''But at a certain point, I've had to get over my own body anxiety issues so it doesn't get in the way of telling the story. It's something I've had to face.

''Do I sometimes feel incredibly shy about going out even in a bathing costume into a swimming pool? Yeah, actually, I do.

''I was on the beach the other day. I was in France on holiday with some friends and we were all lying out. They were all totally fine taking everything off and I was sitting around in my jeans and a top. I kind of didn't want to take anything off.''