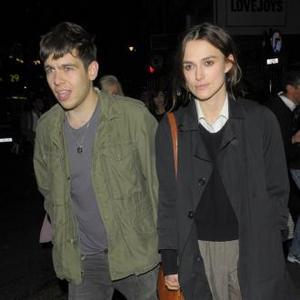 The 'Pirates Of The Caribbean' actress has got engaged to the Klaxons keyboard player, who she has been dating since April 2011, her representative has confirmed.

Keira's spokeswoman said: ''I can confirm that Keira is engaged to be married to James Righton.''

No other details about the engagement are known at this time.

James recently moved in to Keira's Â£2 million London home, which she bought following her split from long-term boyfriend Rupert Friend in December 2010.

A source said in April 2012: ''Keira suggested the idea and he moved his stuff in a couple of weeks ago. They want to get a puppy. It's all pretty serious.''

The couple have also recently been house-hunting for a country home.

Keira - who is worth in the region of Â£30 million according to the Sunday Times Rich List - was spotted looking at estate agent details in a tea room close to where Johnny Depp bought a 13-bedroom mansion in 2011 to use as his UK base.

The 27-year-old screen beauty - who will next appear in romantic comedy 'Seeking a Friend for the End of the World' - recently said she believes stars should keep their private lives to themselves.

She said: ''I hate knowing too much when I'm going to the cinema and watching as a viewer.