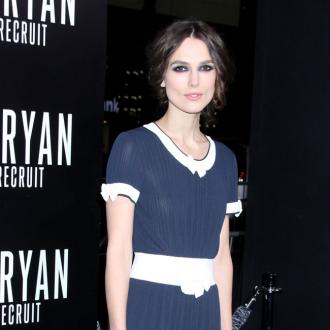 The 'Jack Ryan: Shadow Recruit' actress, who tied the knot with Klaxons keyboardist James Righton, 30, in the south of France in July, admits she loves their relationship but doesn't take it for granted.

Asked about married life, the 28-year-old British actress told E! News at the film's Los Angeles premiere: ''I guess it feels good until it doesn't. At the moment it feels good, we'll just hope it stays that way.''

The brunette beauty, who dated '50 Shades of Grey' star Jamie Dornan, 31, and her 'Pride & Prejudice' co-star Rupert Friend, 32, in the past, previously admitted she didn't enjoy being single.

She said: ''It's so exhausting to be single. When you have committed yourself to someone in an amazing way, it is very liberating. Everything becomes a lot easier.''

Although Keira is no longer looking for love, she formed a close bond with her co-star Chris Pine on the set of their new movie.

She joked: ''It's really difficult looking at him. You're just like, 'If only he were a bit more handsome it might be alright,' but unfortunately...''