Keira Knightley admits she was nervous of doing two sexual scenes in 'A Dangerous Method' because of the reaction it would get on the internet. 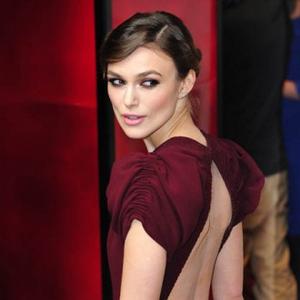 Keira Knightley wasn't sure if she could sign up to 'A Dangerous Method' because of two "masochistic" scenes.

The British actress plays the role of Sabina Spielrein in the David Cronenberg-directed movie about the relationship between Carl Jung and Sigmund Freud, and she admits she was initially nervous about doing sexual scenes because of the "internet" and "the British press".

Speaking at the gala premiere of the movie at London's Mayfair Hotel, Keira told BANG Showbiz: "I was in doubt about doing it because of two specific scenes in the film that are of a masochistic nature and I actually phoned up David and said, 'Look, I love you, I love your work and I love The Script, but I don't know if I want to do this.' It's the age of internet, I certainly know what the British press are like."

However, upon speaking to David, she decided it would be worthy of putting in as the story would be better with the scenes included and he convinced her they would not be "voyeuristic" to the audience.

She added: "He said, 'OK, we'll take them out.' But in that medium, you can't not see what you are talking about. So anyway, we talked about it and we talked about it. So the fact that he didn't want to make it sexy or voyeuristic but kind of brutal and strangely clinical, I sort of went, 'OK, let's do it.' "

In recent years Keira - who is currently dating musician Jamie Righton - has made a step away from huge Hollywood blockbusters such as 'Pirates Of The Caribbean' and 'Love Actually' to smaller pictures, and she admits she made the decision so she could speak to the press less.

She said: "It is a conscious decision. Because you have to do less press about them."

Also walking the red carpet at the event were co-stars Michael Fassbender and Viggo Mortensen.