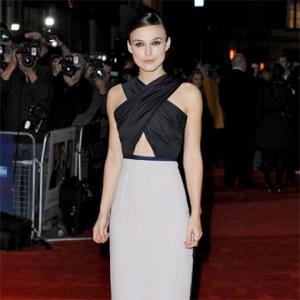 The 26-year-old actress plays Russian psychoanalyst Sabina Spielrein in David Cronenberg's latest film 'A Dangerous Method', in which her character has an affair with psychoanalyst Carl Jung and in some scenes gets spanked by him.

Keira - whose previous roles include parts in 'Pirates Of The Caribbean', 'Pride & Prejudice' and 'Atonement' - admits she struggled to get to grips with the role because she had no connection with Sabina's life.

Speaking at the premiere of the movie at the Odeon West End in London's Leicester Square as part of the 55th BFI London Film Festival last night (24.10.11), she told BANG Showbiz: "This one was daunting because I didn't understand it, I didn't understand who she was or what she was going through ... I really had no connection to her at all so it was about not trying to judge any of it, but to join the dots I suppose. So I took about four months just reading as much as I could."

But the screen beauty admitted she was struggling to walk in her heels and is always nervous about tripping when she is at glitzy showbiz events.

She said: "I'm crap in heels. I'm realising how bad I am wearing these at the moment, they look really pretty but I'm about to fall over."

Keira was joined at the premiere by director David, and her co-stars Viggo Mortensen and Michael Fassbender, who play Sigmund Freud and Carl Jung respectively.