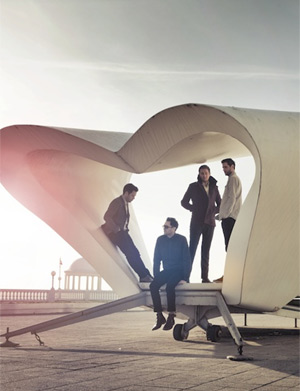 Keane will release 'Silenced By The Night' on 30th April 2012. This is the first single to be taken from their fourth studio album 'Strangeland', released on 7th May 2012, through Island Records.

Keane performed the worldwide premier of the single on Monday's Jimmy Kimmel show in Los Angeles. As a long-time supporter when he discovered the band are making their debut appearance at this year's SXSW Festival, he immediately booked them for the first performance of the new song.

Keane recorded 'Strangeland' with producer Dan Grech (Radiohead, The Vaccines, Howling Bells, Lana del Rey) in the UK at Sea Fog, Ivor Novello Award winner Tim Rice-Oxley's studio. They are calling it their most personal and honest record yet. The British multi-million selling band are now a four piece with the addition of new member bass player Jesse Quin who collaborated with Rice-Oxley on Mt. Desolation.

On finishing the recording of the new album in February, Keane announced two special shows on 9th and 10th March at the De La Warr Pavilion in Bexhill, a location close to their hearts as it was both their teenage haunt and near to where the album was recorded. They announced the dates in the local paper only and within 5 minutes they were sold out. Keane spoke to BBC Entertainment before these special shows

The band will head out on a full UK tour in May and June this year, full listings as follows.