Keane - Is It Any Wonder? Single Review

Review of Is It Any Wonder? Single by Keane

Keane
Is It Any Wonder?
Single Review 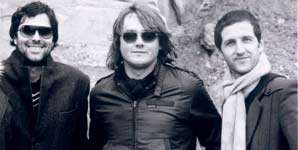 The year 2004 was fantastic for Keane, with four Top 20 singles, and perhaps more significantly, a number one album. Brit Awards and Grammy Nominations followed, yet those who despised their softer approach to rock labelled them 'bed-wetters', perhaps jealous of the 5 million records they have shifted. The band's new LP, "Under The Iron Sea", was completed toward the back end of last year, and is due for release in June.

The opening half-minute of "Is It Any Wonder?" may have you questioning your hearing, because of the appearance of electric guitars – yes, the band famed for drums and piano, have added to their pallet. And thank god, because this comeback single is undeniably fantastic. It pulses along at a decent rate, has a big chorus, and actually makes you excited about the band. The near-psychedelic guitar hook compliments the usual Keane ingredients beautifully, making for a sublime track that is the sound of a band oozing confidence.