Kav - King Of The World (The Undefeated Champion) Video

LA/ UK based Kav has unveiled the gritty music video for his brand new single 'King of the World (The Undefeated Champion)' which is set for release on September 17th 2012 ahead of the October release of his forthcoming album.

The video shows an 'Undefeated' bare-knuckle fighter who's heavily relied upon by gamblers to make them money when they bet on him. However, when he fails one thug who gave him money to KO in the fourth round, he is pursued on his way from the illegal venue by a him and another man accompanied by a vicious looking canine and wielding a baseball bat respectively. He is barely scratched in the attack and launches a vicious tirade on the men and their dog leaving him walking away from their motionless bodies with blood on his face. Kav's raw vocals and heavy basslines easily suit the story in the video for the track which is a brilliant feel-good anthem set to liven up the arriving autumn.

Since returning to the UK in 2011 after being in LA for two years, he has been working on his upcoming album and released single 'Blaggers N' Liars' back in March which he launched at Gibson Guitar Studios in London. 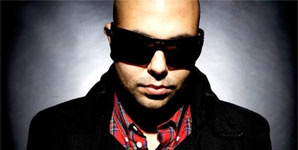 Kav - King Of The World (The Undefeated Champion) Video