What will die-hard fans of the band think of their recent guest acts?

This could so easily have been a ‘Mick Jagger has a heart attack on stage’ story, but it’s not, thank the gods of aging rockers. No, this is a story about Katy Perry performing live with Mick Jagger as the Rolling Stones play L.A. Although, ironically, this might mean the death of Jagger for a lot of Stones fans.

The ex-wife of Russell Brand joined the Rolling Stones on stage at the MGM Grand Garden Arena in Las Vegas to duet with Mick Jagger on a rendition of their 1978 hit 'Beast of Burden.' This isn’t the first ‘star’ to perform with the Stones on this tour; fellow singers like Gwen Stefani and Tom Waits have also been privileged by the presence of those rock legends on stage. The MGM Grand will be blessed with a plethora of stars yet again next Sunday (May 19) for the 2013 Billboard Music Awards. People like Justin Bieber, Taylor Swift, Macklemore & Ryan Lewis, Jennifer Lopez, Lil Wayne, Christina Aguilera will perform.

Matthew Healy, the lead singer with The 1975, who scored a top 20 hit earlier this year with Chocolate, is to support The Stones for their sell-out gig at Hyde Park Matthew, 23, said: “We’ve been playing as a band probably for 10 years, since we were 13. We just started playing music every day. That’s all we wanted to do.” Looks like those aging rockers are helping the young talent bleed through! 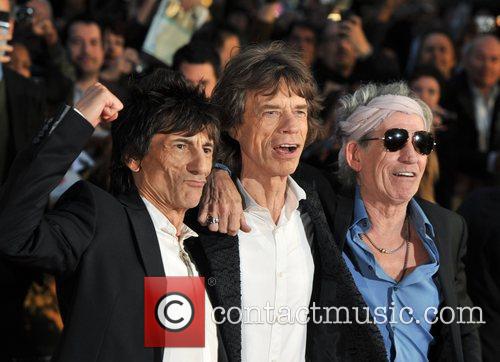 Those Stones are all-smiles at The BFI