People's Choice Awards 2012: The Winners And Losers On A Star Studded Night 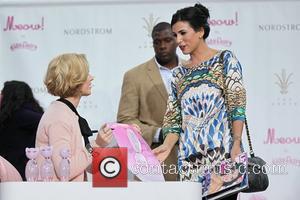 Picture: Katy Perry greets a fan during the launch of her new fragrance 'Meow! at Nordstrom in The Grove. Los Angeles, California - 14.12.11

Ellen Degeneres and Jimmy Fallon were both honoured for their TV hosting talents and American Idol topped the poll as the nation's Favourite Competition Show - a bitter blow for X Factor creator Simon Cowell. Bruno Mars was voted Favourite Male Artist in the Music categories, with Katy Perry as his female counterpart for that award. Maroon 5 capitalised on the global success of 'Moves Like Jagger' by picking up the Favourite Band gong, while Rihanna was Favourite R&B artist. Demi Lovato performed 'Give Your Heart A Break' live on the televised show and celebrated winning the Favourite Pop Artist category. Also performing on the show was Faith Hill, who gave a stirring rendition of new single 'Come Home'. She wasn't nominated for any awards this year though and the Favourite Country Artist honour went to Taylor Swift. Beyonce was nominated in three categories but failed to take any awards home. However, with news of the birth of her first child currently in the headlines, it is unlikely that she would have been able to attend the ceremony to collect them anyway. Similarly, Adele, who seems to have a huge raft of awards nominations under her belt after the release of 21 last year, was nominated for four awards but was victorious in none. She will, no doubt be looking to the Grammy's next month for more success.