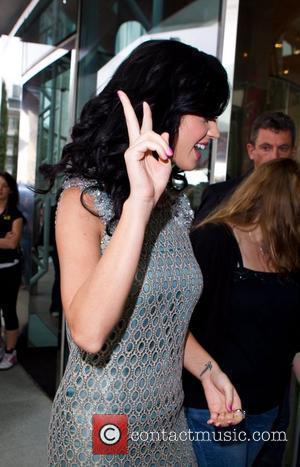 Katy Perry was shocked when she met fiance Russell Brand's rocker pal Morrissey for the first time - because he tried to talk the pair out of walking down the aisle.
Brand proposed to the I Kissed A Girl hitmaker on New Year's Eve (31Dec09) following a whirlwind romance and they plan to marry later this year (10).
But one person objects to their plans to wed - former The Smiths frontman Morrissey.
Perry tells Britain's The Sun, "I met Morrissey for the first time the other day and we had tea together. He's Russell's mate and he is fascinating but he was giving us a hard time about getting married.
"He swooned and sighed, 'Oh, left hand third finger, don't do it.' It was just so eloquent and poetic and like one of his songs.
"It would be great to have him at the wedding but I told him, 'We can't have a Mr Misery like you messing things up'."
But the singer insists Morrissey would definitely be welcome if he performs at the post-ceremony party.
She adds, "It's going to be a small ceremony, so I don't think we'll have a proper band. I'd love to have Morrissey (perform)."