Katy Perry's insurers have told her to get rid of her trademark spinning peppermint bra because her hair keeps getting caught in the Wheels. 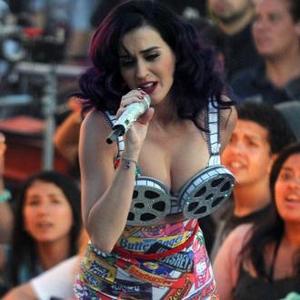 Katy Perry's insurers have told her to get rid of her trademark spinning peppermint bra because her hair keeps getting caught in the Wheels.

Apparently they are concerned about the resulting high level of strain on her neck during her stage performances.

Katy said: ''I keep being told the insurers are worried I will injure my neck. I seriously doubt it could be lethal but they want a new bra designed that will not allow hair to be caught up.

''Well, I was always known at school as the over-the-shoulder-boulder-holder.''

The 27-year-old star admitted that her array of wigs have been tangled up by the rotating candy bra attached to her dress while she is on stage.

The outfit, which features red and white spinning lollipops, appears in her new movie 'Katy Perry: Part Of Me'.

She admitted that when her hair does get caught up in her costumes she has to carry on regardless.

She said: ''My hair got caught in the wheels of my spinning peppermint bra and began to coil around and around.

''I'm forced to just go with it so, by the end of the song, it looked quite like I was licking my own t**. What a girl does for her art.''