Katy Perry wants to wear a ''bacon bikini'' on her next album cover, and is planning to sing more about meat. 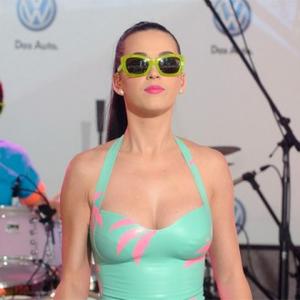 The chart-topping singer - who is set to wed vegetarian British comedian Russell Brand later this year - is planning an album about meat after singing about fruit, sweets and cakes on her previous LPs.

She said: "My new record 'Teenage Dream' is more about confectionary and candy and baked goods. There's less fruit imagery.

"For my next album I'd like it to be about meat and I want to be on the cover wearing a bacon bikini. Also I want my records to smell of sausage or pork. CDs are over, but not if they smell original."

The 'California Gurls' hitmaker admitted she thinks her former self - who released a gospel album in 2001 - would "flip" if she heard some of the lyrics on her current tracks.

She added to Q magazine: "She'd probably flip. I'd have to give her a hug and calm her down. There's a lot about me she wouldn't understand. She might be a bit scared of what I've become. She might not like the dress or the heels.

"She might blush at the song 'Peacock' . it's about a d**k. But then there is a very questioning track on the album called 'Who Am I Living For?' which she would relate to."