Katy Perry has revealed she goes out in wigs and various other disguises to avoid being spotted by the paparazzi. 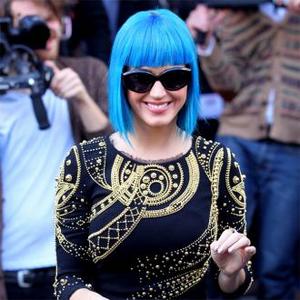 Katy Perry goes out in wigs and hats to avoid being seen when she isn't working.

The 27-year-old singer - who split from Russell Brand in December 2011 after 14 months of marriage - tries her best to shy away from her fame by donning disguises when she doesn't want to be spotted, but she accepts all the attention is a natural outcome of her celebrity status.

She said: ''I didn't really ask for that but it's just a product of all this. I deal with it when I'm working, but when I'm not working, they can 'f' off.

''It's what I have to do, it's the environment I'm in completely. I know how to separate it completely. You don't see me everywhere, you see me when I'm working.''

The 'Part of Me' hitmaker is looking forward to taking some time off to relax later this year when she has finished promoting her re-released edition of 2010 album 'Teenage Dream' under the title 'Teenage Dream: The Complete Confection'.

During an interview with station BBC Radio 1 in London today (19.03.12), she said: ''I'm going to Paris, Berlin, India and then I'll be home and I'm going to take some time off like I've been saying.

''I always knew I was going to do a re-release of 'Teenage Dream' and do small bits of promotional stuff and come and visit my fans in the UK because I think that's really important.''

During her hiatus, the pop star intends to spend some quality time with her friends.

Katy - who is close with Rihanna - has had the same group of pals for years and admits she doesn't make new friends easily because she is wary of people's intentions.

She said: ''I don't have fast friends. I don't have a lot of those. In some ways I'm guarded for all the right reasons because a lot of people want to be your mate, your chum, especially when you're at this moment. But they kinda have to earn it with me and show their true colours.''