Katy Perry often wonders what life would have been life if her mother had continued to go out with legendary musician Jimi Hendrix. 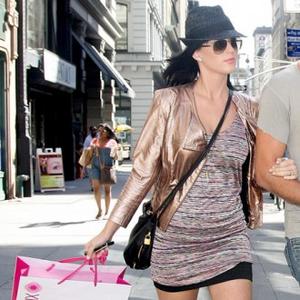 The 'Teenage Dream' singer's mother Mary Hudson - who along with the star's father Keith is now a pastor - briefly dated the late guitarist in the 1970s and the 25-year-old beauty occasionally wonders how her life would have turned out if her parents had made different decisions.

She said: "Well, 'dating' is an exaggeration. 'Dated' would be right. She went on a date with him. Sometimes I say to her, 'Mom, you shouldn't have been such a prude with him - I would have been a Hendrix.

"But, yes, they both had a wild life, then they found God and felt like they needed to have a personal change, and that's how they decided to raise me. And I've turned out all right in the end - beyond the bikini girls and the whipped cream t*ts, and all that sort of stuff."

Katy - who is engaged to British funnyman Russell Brand - is delighted with how well her parents get on with her fiance and thinks they bonded because of the way the 'Get Him to the Greek' star has turned his life around after battling heroin and alcohol addiction.

She added to Australia's Daily Telegraph newspaper: "Russell's come a long way from the trials and tribulations of what he went through, and hopefully he's turned around.

"My parents love him because they know about change and they work with people who want to change. They give everyone the benefit of the doubt."